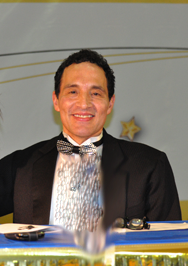 Alex began his professional ballroom dancing career at 18 in New York City. His training includes jazz, tap, ballet, theater, and voice. After passing his teaching qualification exams, he worked and trained at Fred Astaire in Stamford, CT with owners Gary and Lori Pierce, co- founders of the American Ballroom Theater. In 1990, Alex co-founded and became a coach of the Yale University Ballroom Dance Team. In 1994, he was awarded a national honor for his work with the team. He later co-founded the Yale University Ballroom Theater, a special performance group where he has served as the Artistic Director. While a member of the Imperial Society Teachers of Dance, he earned degrees in American Smooth and Rhythm, International Standard Associate, and Theater Arts and Performance Associate. Alex has choreographed for numerous venues including television, theater, and film. Currently, Alex teaches at Let’s Dance in Rhythm and is the co-founder, Artistic Director, and choreographer of Connecticut Ballroom Theatre.